“Hotel Sapiens and other irrational tales”

A strand of thread in the ashtray comes to life in the nocturnal room.  It glows blue and crawls like an inchworm. What is it? In the morning Rosa saw something strange in the creature and wanted to take it to her place of work at the museum. Her husband identifies something different in the wanderer: Normal distribution! A Gaussian curve!

The book portrays the world after an ecological crisis and the fall of economy. Depending on one’s point of view, Hotel Sapiens is a prison and refugee camp or a research centre and museum that preserves something that may no longer exist. Väinö K-nen is a cloudspotter who has ended up under the insitution’s mist-shouded sky. He lives under the supervision of the mysterious Guardians and the expressionless clone-like Nuns. In the hologrammatic Reconstructions noted personalities of the past come to life again and offer the residents their teachings. This multifaceted gallery of characters includes the Everyday Woman, the Higgs Boson, the Flowerseller and Peik, who receives letters from his daughter from Kamaloka, the land of shadows. But can one be taught how to survive in a dystopian reality?

In the manner that is typical of Krohn, the characters have signs along with their names which accompany the reader’s absurd world. By this means, different phenomena and ideas meet and the dialogue supports juxtapositions. The book’s short chapters open up portals into the characters’ lives and pasts. As the narrator moves subtly between past, present and future, the reader has to remain watchful.

The author’s sentences are clear and enjoyable, they forge unexpected connections and metamorphoses. In the text, Krohn continues the discussion of the passage from the philosopher Karl Popper that is quoted at the book’s beginning. Human behaviour in relation to rationality and chance, clouds and clocks, forms the basic idea which also bears a wider comparison with the world that is portrayed in the book:

“What can the cloud and the clock have in common – with the exception of my gaze? One is born, the other is made, one is chaos, the other is order. But neither of them is free, as they cannot choose anything. One is the prisoner of chaos, the other of order. My freedom is my imperfection. I am the love child of a clock and cloud, of time and eternity.”

Leena Krohn is a unique explorer of reality whose universalist fiction has in Hotel Sapiens acquired yet another fascinating chapter. 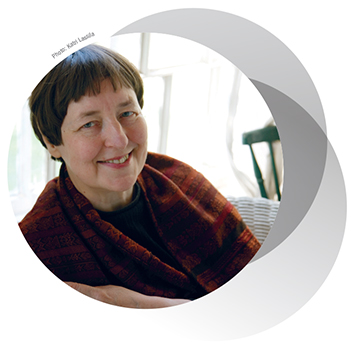 Leena Krohn (b. 1947) is an award-winning author whose work has been translated into several languages. She is known as a writer who moves between different genres, forms and dimensions, with a voice that is very much her own.

Ecological themes have been present in Leena Krohn’s work ever since her first book, Vihreä vallankumous (‘The green revolution’, Tammi, 1970), which is an ecoconscious book for children. Her breakthrough came with the short novel Tainaron: postia toisesta kaupungista (Tainaron: Mail from Another City, WSOY, 1985, in English: Prime Books, 2004), about a city inhabited by insects. Her book Matemaattisia olioita tai jaettuja unia (‘Mathematical objects or shared dreams’, WSOY, 1992) was awarded the Finlandia Prize. In these and other books, Krohn displays a masterful ability to portray details, moving from the microscopically small and back to the large again.

In recent years Krohn’s narrative writing has become increasingly satirical, as in the novel Unelmakuolema (‘A dream death’, Teos, 2004) which grapples with social issues – often with a note of open concern, though the author’s playful style and fantastical turns of plot provide the reader with inexhaustible experiences. For children and youth she has also written Ihmisen vaatteissa. Kertomus kaupungilta (‘In human clothing. A tale from the city’, WSOY, 1976) which has been made into a motion picture. Auringon lapsia (‘Children of the Sun’, Teos, 2011) is illustrated by Leena Krohn’s artist sister Inari Krohn (as is ‘The green revolution’, also).