Finland: from historical past to present day

1944 was the most dramatic and fateful year in twentieth century Finnish civil and military history. Finland was in a military alliance with Germany on the northern flank of the European Eastern Front, but during 1944 the country’s military and political positions changed totally. After the liberation of Leningrad at the start of the year the Soviet armed forces turned against Finland with a major offensive in June – on the same day as the invasion of Normandy – with the goal of occupying Helsinki. The attack was halted with German military help, but at the same time peace feelers were put out to the Soviet Union, which demanded that the agreement with Germany should be broken and that the German troops should immediately be expelled from Finnish Lapland.

The book gives a multifaceted, month-by-month view of Finland in its transition from war to peace. It takes in many levels, from the high-level politics of Hitler and Stalin to individual human stories and eyewitness accounts from the front and everyday life in Finland. It combines the “big” history of the war, comprising the political history and its major figures, with the “small” and personally experienced one, presenting typical aspects of everyday life, entertainment, literature, or science in the shadow of war.

From a structural point of view the book is built around the various months of 1944. Changes of scene and parallel events produce a collage that forms a dramatic story in almost cinematic terms. In Finland the events and memories of that year still live in the public consciousness of the country’s historical role in the Second World War, its connections with Nazi Germany, its relations with the Soviet Union after the war, and its relations with Germany and Russia today.

Republiken Finland i går och i dag. (Finland yesterday and today. Finnish history from the Civil War to 2012)

Based on a background of solid, academic research and the latest scholarly literature, this book presents balanced interpretations and provides an updated view of twentieth-century Finland between East and West within the political history of the Baltic Sea region.

The book is organized chronologically and deals with the classical turning points and critical years in Finnish history: the Declaration of Independence and the Civil War of 1917–1918, the Winter War of 1939–1940, the Continuation War of 1941–1944 and the years of political conflict, from Finland’s dependence on the Soviet Union to its accession to the European Union. The history of events and the military and political history are complemented by a historical account of  Finland’s foreign policy, economy and society, and an examination of the country’s ideological and cultural features: the movements of political extremism, the “language question” (the conflict between Finnish and Swedish in the 1920s and 1930s), and cultural phenomena,  science, art and literature.

The controversial major figures of twentieth-century Finnish politics – Marshal Mannerheim and Presidents Paasikivi and Kekkonen among them – appear in a new, multifaceted light, along with the country’s later presidents and leading politicians. Finland’s domestic and foreign policy alliances are set in a Scandinavian and Northern European context, with Germany, Sweden and the Soviet Union / Russia as ever-present actors in different roles. This great story is accompanied by snapshots of everyday life and individual human fortunes. 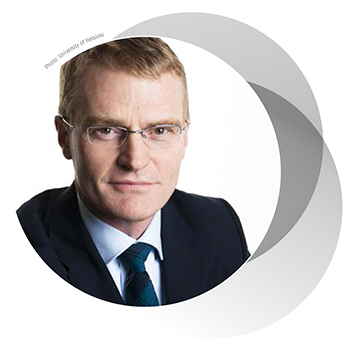 Henrik Meinander (b. 1960), who holds the English-speaking professorship in history at the University of Helsinki, is an unbiased proponent of new views of Finnish and Scandinavian history. Although he is closely connected with academic spheres, he reaches a wide range of readers through his popular articles and columns which appear mainly in the daily Hufvudstadsbladet. His monograph Finlands historia: linjer, strukturer, vändpunkter (Söderströms, 2006 & Atlantis, 2006) has been published in English as A History of Finland.

Professor Henrik Meinander has received numerous awards which include the Swedish Academy‘s Finland Award (2007) and a research award from The Swedish-Finnish Cultural Foundation (2008). In 2002 he was elected a member of several scientific societies, including the Royal Swedish Academy of Science.