“The net and freedom”

“If you want to liberate a society, just give them the internet.” Google’s Middle East and North Africa marketing manager

Since at least the advent of the Arab Spring, people have been going on about how social media and internet messaging have created new opportunities to spread democracy and topple dictatorships. Investigative journalist Hanna Nikkanen has written an enlightening, varied book on the sorts of problems that digital internet communications, which are useful in many ways, have brought with them. For example, Nikkanen claims that the ‘digital fantasy’ mentioned above does not describe reality, but rather people’s unfulfilled wishes. In praising the liberating power of the internet, the Western world has created unreasonable expectations among people living in dictatorships of how effective online activism can be.

Monitoring of internet and mobile communications increased significantly after the 9/11 terror attacks in 2001. The ‘War on Terror’ was used to justify increases in the powers of state authorities. Now official bodies that have acquired almost limitless surveillance powers have become an even greater threat in some countries than the terrorist attacks such surveillance was meant to prevent. The West helps dictatorships and other undemocratic states by such means as selling them censorship technology and agreeing to use search engine filters in exchange for access to the giant markets of China and India.

The online presence of peaceful middle-class Westerners does not carry the same sort of risks as that of citizens of totalitarian or democratically unstable countries. Ordinary citizens do not usually see any problems in the fact that every new store loyalty card means the creation of a new database about him or her. On average, every Finn has data about him or her contained in around 150 separate databases. Aside from details of our purchases (harmless in and of themselves), information about us is held in more sensitive databases as well. For instance, access to medical records should be strictly prohibited to people other than staff involved in the patient in question.

Nikkanen sees no way to avoid serious problems other than updating legislation. Surveillance technologies used by the security services are expanding more rapidly than the means to shield popular movements from such surveillance, and practices that restrict our fundamental rights are advancing more rapidly than laws to protect those rights. Nikkanen calls for the bodies that draw up mobile network standards to include strong representation from human-rights organisations.

Hanna Nikkanen’s book acts as a prism to open up the multi-dimensional issues –including restrictions on political freedoms, threats to public security, the spread of hate speech, digital class divisions, information leaks, exporting monitoring technology to oppressive regimes and reductions in privacy protection – that have been brought about by ever-increasing online communication and companies to monitor that communication.

In her book, Nikkanen uses a variety of examples to analyse the good and bad aspects of digitisation. Nevertheless, she believes that digital communication technology embodies greater openness and equality than ever before. 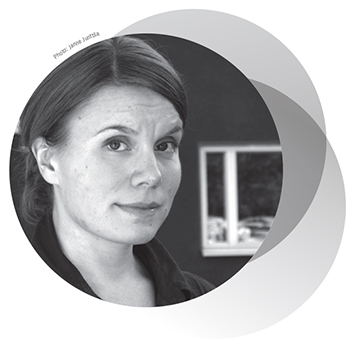 Hanna Nikkanen (b. 1981) is an investigative journalist and an award-winning author of non-fiction books. She has received the EU Journalist Award and the Finnish State Award for Public Information. In her work, Nikkanen writes about the upheavals caused by digital technology and economic globalisation, particularly with regard to human rights and democracy. In Viaton imperiumi (‘The innocent empire’, 2010), a book of reportage, Nikkanen investigated the resistance encountered by Finnish corporations in developing countries. Arabikevät (‘The Arab spring’, co-authored with Lilly Korpiola, 2012) looked at the social and historical background behind the popular uprisings in the Arab world as well as the results of this new citizen activism.