“Brute force: The story of icebreakers”

Brute force is an impressively written, lavishly illustrated book about icebreaker ships. It introduces the reader to icebreakers from Finland and other countries and tells about the history of icebreaking equipment.

The Baltic Sea is the most heavily traversed sea area in the world. A wintertime visit to an ice-enclosed Finnish, Swedish or Estonian harbour is an unforgettable experience. Maritime traffic is kept running smoothly by the world’s largest fleet of icebreakers. In the depths of winter, over 20 sea-going icebreaker ships are at work on the Baltic, logging over 8,000 operations annually.

There are over 60 ports in Finland, all of which may freeze over in winter. To safeguard commercial shipping, the ports have to be kept open, and that work is done with icebreakers. Finland has become a global superpower in icebreakers. Today, sixty percent of all the icebreaker ships in the world are built in Finland.

This book, which is written in a style accessible to the layperson, covers the milestones in the development of icebreaking technology. Many innovations in the shipbuilding industry have their origins in the specialised area of icebreakers. The world’s largest, most luxurious cruise ships berth using 360-degree azimuth thruster propellers, which were originally developed for icebreakers. The development of technology used in icebreakers, from thousand-horsepower steam-driven icebreakers to modern icebreaking vessels that can go through two-metre-thick polar ice, has required great engineering ingenuity.

The first European icebreaker was built in Germany in 1871. The world’s first purpose-built icebreaking ship, christened City Ice Boat No. 1, was built in the USA in 1937 to break up ice caused by the flooding of the Delaware River. The US Coast Guard cutter Healy, a floating Arctic research laboratory, has been deployed to the Arctic Ocean and the Southern Ocean. The world’s largest icebreaker, the NS 50 Let Popedy, was built in 2007.

Finland was the first country in the world to utilise multifunctional icebreakers. In winter, these vessels break ice in Finnish waters, while in summer they perform offshore tasks elsewhere in the world: they have ploughed the seabed for pipelines, laid oil pipelines and cables several kilometres below the surface in waters off Brazil and Angola, tugged icebergs in Alaska and assisted in installing drilling valves in the North Sea.

The need for icebreakers is increasing, as the race to exploit the natural resources of the Arctic has begun. The Northwest Passage is only navigable at the peak of summer. There is still no North American icebreaker capable of operating in the Northwest Passage for more than a couple of months. The ice conditions require more power, which only Russian nuclear-powered icebreakers have – and they can run for years without needing to refuel. The Russians already use their nuclear icebreaker fleet to keep the Northern Sea Route, another shipping lane, open.

This book by Ari Turunen and Petja Partanen is unique in the world. It opens up the fascinating and largely unknown world of icebreaker ships working in tough Arctic conditions along with their crews. 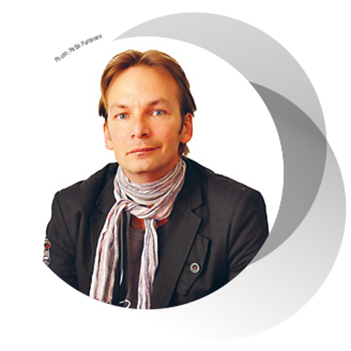 Petja Partanen is a qualified engineer. In his work, he makes science and technology accessible – and he likes big machines. Currently working as a freelance journalist, Partanen was previously the head of communications, communications officer and event coordinator at Technology Academy Finland, the foundation that awards the Millennium Technology Prize, an award of one million euros. He is interested in the ways technological developments change the world.