“The handbook of everything”

“It is entirely possible that reality exists. No one has yet managed to prove it, though.”

Esko Valtaoja’s defiantly (or humorously) titled book, ‘The handbook of everything’, lays down a challenge to the reader in its very first sentences. In his book, Valtaoja addresses some of the questions that have occupied human minds throughout the ages and explains the latest scientific views – or his own – on various subjects. ‘The handbook of everything’ covers everything from the laws and structure of the universe to the stages of human evolution up to our present form.

Valtaoja has a background as an astronomer and is a leading expert in his field. In addition to astronomy, he writes lucidly on themes such as Reality, Life, People, History, Right and Wrong, Belief and Knowledge, as well as Spirit. To Valtaoja, the spirit is evident in art and other endeavours in which people have been engaged for tens of thousands of years, even though such activities are not strictly necessary in order to stay alive.

When writing about human evolution, Valtaoja reminds us that if we imagine humanity has now reached ‘completion’, we are sadly mistaken. Why should evolution stop with this version of humans? Valtaoja is certain that we are only at an intermediate stage – the missing link between apes and true humans. We may understand a bit about suffering and death, but we are not yet able to do much at all about overcoming them. The story of mankind is only just starting, not coming to an end.

Valtaoja challenges traditional historical writing by juxtaposing significant events. As an example, he takes the year 1609, when Spain and the Dutch Republic agreed a truce in the Eighty Years’ War, Okinawa was annexed by the Empire of Japan and King Philip III decreed the expulsion of the Moriscos from Spain. In Valtaoja’s opinion at least, the events that really influenced the future but which few contemporaries heard about were the publication of Johannes Kepler’s book on planetary movements and Galileo Galilei’s first telescope. It was these developments that ushered in the world’s latest historical upheaval.

In dealing with the conflict between faith and science, Valtaoja states why religion is true – and why it is not true. Valtaoja has come down in favour of the latter option in his own case and provides an unchallengeable explanation for his conclusion. Here, again, Valtaoja’s train of thought is dazzlingly enjoyable and may generate a few grey hairs for those who are unshakeable in their belief.

Then again, truths are constantly in flux: the author humbly admits that there are a vast number of things which are merely theories. We have only two tested, reliable theories about the world: quantum physics and the Theory of Relativity.

The particular strength of ‘The handbook of everything’ lies in the book’s fully formed logical trains of thought. The pared-down versions presented in this brief review give only a faint shadow of the book’s multiplicity of information and thrilling wealth of intellectual curiosity. Valtaoja’s fun, insightful, genre-busting writing style and skilled yet eminently intelligible argumentation draw the reader in, so that by the end, the reader is prepared to let the author off the hook for the fact that ‘The handbook of everything’ doesn’t actually provide answers to absolutely everything. 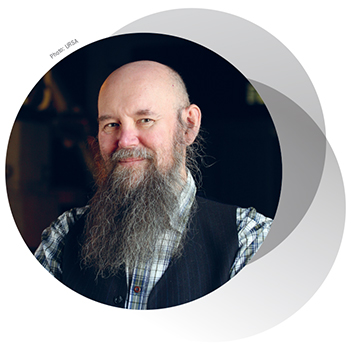 Esko Valtaoja is a professor of astronomy who is well-known for making science accessible to the general public. In 2010 he was ranked as the second most important Finnish scientist by the Finnish Science Barometer. His works on astronomy, space research, astrobiology and related scientific fields have sold a total of over 100,000 copies. Valtaoja’s colourful writing has persuaded many readers who do not otherwise deal with the natural sciences to read about astronomy.

Valtaoja has published over 200 research articles on his specialities of quasars and radio astronomy in international scientific journals. At the end of the 20th century, having grown tired of all the humbug presented as truth, he decided to attempt to write a book about life in the universe. The result was Kotona maailmankaikkeudessa (‘At home in the Universe’, 2001), a work which was awarded the Tieto-Finlandia Prize, Finland’s most prestigious award for non-fiction books. Valtaoja has also been awarded the Finnish State Award for Public Information. The handbook of everything, which was published in October 2012, has already been awarded the Lauri Jäntti Foundation Prize, another prestigious prize for Finnish non-fiction.