“He glances in the mirror and fluffs up his hair. He’s ready to sing, run, kick, dance, climb and sparkle like the silvery stars on his black nail varnish.”

Michael Monroe shot to fame in the 1980s as the frontman of the band Hanoi Rocks, who enjoyed a cult following around the world. Monroe’s style has never embraced blandness. It’s fitting for a pop star, but before he achieved fame he had to rely doggedly on his own vision. In his early twenties Monroe had to decide whether he was going to slide into the junkie lifestyle among Stockholm’s population of drug addicts with Finnish roots, or whether he was prepared to put in some hard work in order to realise his musical dreams. Monroe chose the latter option.

The Hanoi Rocks era made Monroe an international cult star, but after the band’s breakup the star had to struggle for years in London and later in New York to forge a new career. Right at the very start of his career, Monroe set a goal for himself, saying that if he became successful, he wanted to make the world a better place however he could through rock music. Monroe has not wavered from that objective, even when he hasn’t always known where he might be spending the next night. The many aspects of Monroe’s music – rock, taking a stand, rebellion and individualism – have been present in his output throughout his career.

Tired of the hubbub of London and New York and professional setbacks, Monroe returned to Finland in the mid-1990s with his American wife to settle in a rural area. The peace and quiet and natural surroundings re-energised him at first, but Monroe soon noticed that he was a curiosity in the small village, attracting stares in the local shop. Living in a cosy but run-down house could be tough at times:

“I was hobbling around and swaying on one leg, laughing to myself about how lots of people probably thought Michael Monroe rode around in a limousine and spent his days working on his suntan by the pool. The truth was completely different. In real life, Michael Monroe grits his teeth and chops down trees and shovels snow with his leg in plaster in the freezing darkness out in the middle of nowhere.”

Although this book does move in elevated rock circles, there is no cause for readers to envy the life of a celebrity basking in the spotlight. The same anxieties and joys unite us all: Am I good at my job? Do I deserve people’s trust? Can I trust others? Will I find a balance? Can I be myself?

Monroe agreed to participate in this biography to show “you don’t need to be an idiot to be a rock singer. Some people think any kind of goofing around and idiocy is fantastic and part of the life of a rock star. I tend to think that stuff is just embarrassing.”

This book by Ari Väntänen is a compellingly written, direct, honest and open source of information for every Michael Monroe fan. It covers his relationships – and conflicts – with key people in his life, his various band line-ups, how the albums came about, as well as his tours and moves from one continent and city to another. It is chock-full of big names from the world of rock music whose paths have crossed Monroe’s. The text is interspersed throughout with raw rock photos. 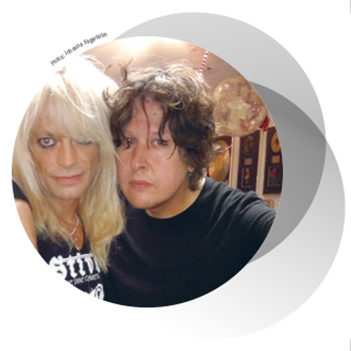 Ari Väntänen (b. 1974) is a Finnish author, journalist and musician. He is the managing editor of Sue, a Finnish music magazine, but has written for other music publications as well. Väntänen co-authored the book Hanoi Rocks – All those years wasted together with band members Michael Monroe and Andy McCoy.