Crime novel (2012) can be read as a parody of detective fiction, but such an interpretation would be missing the point. The book does not set out to be a parody or ironic spoof; rather, it presents a serious social discussion clad in humourous garb and seeks a feasible way of living in the world. To be sure, this novel also plays around with the tradition of crime fiction. Inspector Vehmas is a typical detective character: getting on in years, he is a loner and thinker prone to depression. His predecessors are Swedish author Henning Mankell’s Kurt Wallander and Timo Harjunpää, the creation of Finnish crime writer Matti Yrjänä Joensuu.

Tamminen’s description of police work would also suit a ‘proper’ crime novel. The only thing that’s unusual here is the criminal. The mysterious figure of Ångström does not rob or kill; he merely depresses and defames: “Having reached his target, Ångström attacked social shame and passed judgment on existential angst and the culpability for a waste of a life.” True to his name, which literally means ‘jet of steam’ in Swedish, Ångström is volatile and difficult to grasp. He is an allegorical figure, and the suggestion of the word angst (in Swedish: ångest) in his name reveals that he represents the dark forces present in everyone: depression, thanatos and all the evil that ordinary people do to each other, whether intentionally or unintentionally. Ångström, too, is ‘wounded with shame’ and so he passes that evil along.

He is helped in this regard by society and the media. Performance requirements at work mean that people are machines outside the home, but apathetic when they are at home. The activities of the tabloid press are also morally destructive: they use images of various threats to frighten people and make the world feel unsafe. The effects of the internet, meanwhile, include the decay of social relationships, the pornographisation of life and increasing banality of information exchange. Above all, the sanctity of life has been lost, and people have been left alone to confront the limitations of their existence. In these circumstances, it is easy for a depressed person to strike out.

Nomen est omen for Inspector Vehmas as well: his surname means ‘leafy’ or ‘verdant’ in Finnish, and he represents the life force. The seasons reflect Vehmas’ struggle against worry, anxiety and the fear of death. The long winter darkness dominates the imagery in this novel, until spring brings a sort of solution. Vehmas understands you cannot fight hatred with harshness; you must smother it with love. An example is found in Sweden, where a real ‘wave of love’ is generated. As in his previous novels, Tamminen exploits familiar stereotypes of Finns as glum and negative, and Swedes as a social, positive nation.

The key lesson is to learn to accept the world as it is. Petri Tamminen hints at Eastern religions and Wittgenstein, whose well-known proposition he parodies: “Everything is as it is so that everything could be as everything is.” People should love themselves so they do not yearn for too much love and approval from others. Accepting yourself is the best form of self-protection. 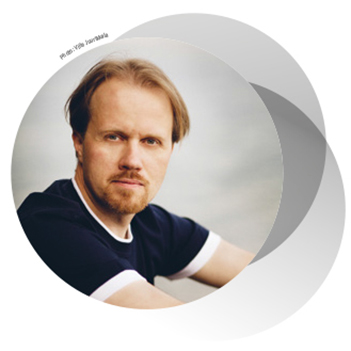 Petri Tamminen (b. 1966) is a humorist with an unassuming style, who is recognised for his highly perceptive portrayals of Finnish men. His highly acclaimed books include Elämiä (‘Lives’, Otava, 1994), Piiloutujan maa (‘The land of the hiding’, Otava, 2002) and Enon opetukset (‘What my uncle taught me’, Otava, 2006). Recurring themes in Tamminen’s work are the difficulty of being a man, shame, fear of failure, loneliness and anguish caused by social relationships. His works have been translated into numerous languages, including Czech, Danish, English, German, Slovene and Swedish.