In his latest work – his twenty-first – Olli Jalonen returns to the subject matter of his novel Yhdeksän pyramidia (‘Nine pyramids’), which was published in 2000, to continue building work on his own texts. Valo (whose name means ‘light’ in Finnish) is a conceptual artist; his colleague Silla is an architect, and they have been commissioned to erect a pyramid-shaped work of art in each of nine European cities before the turn of the millennium.

Karatolla now describes the entire project and what has happened to the pyramids and the people in the 21st century. The novel begins and ends in Iceland. The eighteen-month-long art project is being dismantled: the last pyramid is a 25-metre-tall structure rising out of the water in Reykjavik. The relationship between Valo and Silla, which began tentatively, is also coming to an end because the Pyramid Man is suffering from incurable cancer. Valo has, however, brought his ideas to fruition: “He knew he had managed to create places of memory in nine cities, places that would be remembered even after they had been dismantled.”

Karatolla is a Finnish dialect word which means a bonfire that is burnt at New Year’s or Easter celebrations. As a young man, Valo’s experiences by the karatolla bonfire led him to the insight that the world is composed of nine basic elements: wind, smoke, light, earth, water, snow, ice, air and time.

The ‘pyramid cities’ are Prague, Brussels, Santiago de Compostela, Krakow, Reykjavik, Bergen, Helsinki, Avignon and Bologna. Valo and Silla had to rush to visit all of them within the space of twenty-four hours: “Our wedding day was also the day of the premiere, the unveiling of the exhibition.”

In Bologna, the pyramid installed underground is designed to be permanent: a metre of it is visible on the piazza, surrounded by glass through which people can peer down at the rest.

Olli Jalonen writes astonishingly vivid, intriguing descriptions of the roles of the ‘elements’ in the construction of the pyramids and of the functions and aesthetics of materials and building components.

When Valo becomes ill, Silla goes from city to city again, now dismantling the project. It becomes clear to her that Valo did not achieve his megalomaniacal work of art by entirely above-board means. Silla also begins her journey along her own artistic path. She titles her debut show ‘9 Phalluses, 10 Lies’.

The novel ends with Silla’s journey to Iceland 10 years later. Inspired by Virginia Woolf’s To the lighthouse, she intends to build a work made from parts of the mirrored pyramid from Santiago de Compostela and Reykjavik’s water pyramid next to the lighthouse on the island of Seley, in memory of Valo.

Karatolla gives the reader plenty of space for thought and imagination. With rich detail and a remarkably unique voice, Jalonen writes about European cities and the ambitions of our contemporaries who live there, as well as honesty and deception, being an artist, how permanence is corrupted and destroyed, and how fragile the fate of love can turn out to be.

The end of an era is distilled in Silla’s experience at the outer edge of Europe: the only permanent thing in the world seems to be the pulsating beam of the lighthouse, illuminating the night-time sea. It is both a symbol of stark reality as well as a uniquely comforting element: light in the darkness. 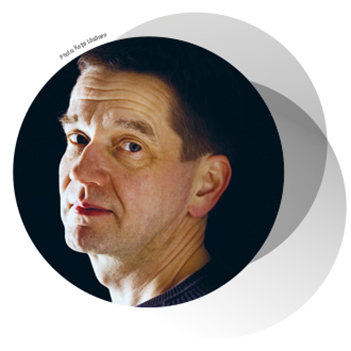 Olli Jalonen (b. 1954) was awarded the Finlandia Prize for Fiction for his novel Isäksi ja tyttäreksi (‘Becoming father and daughter’, Otava, 1990). His novels Johan ja Johan (‘Johan and Johan’, Otava, 1989) and 14 solmua Greenwichiin (‘14 Knots to Greenwich’, Otava, 2008) were also nominated for the same prize in other years. Jalonen’s books have been translated into Swedish, Norwegian, Estonian and German.