The eponymous central character of Juha Seppälä’s new novel Mr. Smith is almost an omnipotent man who moves freely in time and space, from Tsarist Russia to contemporary Los Angeles. He claims that he is a ‘sovereign individual’; sovereignty and individuality are traits that Seppälä’s protagonists have always striven towards.

On the other hand, he also says that he is a ‘necessary evil’ fulfilling the role of a protagonist in a novel. His name refers to anyone and everyone; he is, in a way, a minimalist relic of an individual. On one level there is the suggestion that he is the alter ego of his creator: the author’s surname refers to a smith (seppä).

Smith knows ‘a lot about everything’ and has dedicated his life to solving people’s problems: he appears behind the door and offers help when everything’s gone to pot and you’ve already paid the price. That being said, we never see any examples of his problem-solving skills; according to Smith identifying problems is more important than resolving them. And Smith has certainly identified the most serious problems of the modern world and extrapolates upon them at length, and doesn’t mince his words.

The most acute of these problems is that of money, something with both an individual and a societal dimension. From the individual’s perspective, it is tragic that he must spend the majority of his unique life earning a living, leaving no time to realise himself or to enjoy life. For society, the catastrophe is that libertarian market economies have achieved an all-encompassing position throughout the world and have run beyond the reach of democratic political decision-making. Thus markets become a force akin to the whimsical gods in Greek tragedies, a force that will destroy the helpless individual. Moreover, it turns culture into nothing but banal, throw-away entertainment.

The downside of unregulated markets is that they collapse once the tension between wealth and speculation grows too large. And when economies collapse, ‘enraged people move en masse’. The last great collapse eventually led to the Second World War, and Smith predicts similar destruction and devastation this time round too. Behind the apocalyptic visions of Mr. Smith, we can sense the influence of Oswald Spengler; Seppälä’s extensive oeuvre even includes a radio play whose central character is the harbinger of Western demise.

Literature as light entertainment grows and flourishes in cultures guided by the powers of the market, i.e. in which sales figures dictate the value of a work. Popularity is achieved by writing easily accessible plot-based novels that don’t challenge readers to use their brains.

As the antidote to the commercial novel he so criticises, we are gradually presented with Seppälä’s own poetics, which in the 21st century has been characterised by a plotlessness approaching the proportions of the anti-novel, the fragmentary nature of the world depicted, and an essayistic and even aphoristic style.

However, the apparent disjointedness and lack of plot in Seppälä’s novels is only a mirage: the different stories in Mr. Smith, which at first seem unconnected, are in fact intrinsically linked to one another on a thematic level. History and the present day are seen through one another, thus highlighting the shared features and individual characteristics of different eras.

Seppälä doesn’t hold readers by the hand, but demands a lot from them. In return his books are very rewarding. As a writer, Seppälä is every bit as excellent as Mr Smith is a narrator. He is familiar with our endangered Western cultural tradition, and in his recent works he has broadened his scope towards Oriental religion and philosophy. The very possibility of the transmigration of the soul seems to flash through Mr Smith’s narration as it darts from one time and space to another. 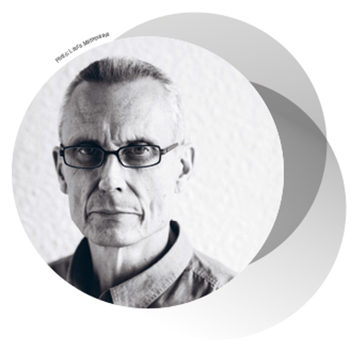 Juha Seppälä’s (b. 1956) output covers more than twenty critically acclaimed works, many of which – including novels, short prose, short stories and radio plays – have been awarded prizes. The author is known as a portrayer of barren and gloomy mental landscapes, but in his texts one can read a premonition of the grand narratives, such as love, or at least the sense of its loss. His works, like Hyppynaru (‘Skipping rope’) and short stories, have been translated into several languages. In addition to prose, television plays and work for radio, he regularly writes columns. Seppälä holds a Master of Arts in philosophy.