“Who owns Russia? The dynamics of ownership and power in Russia”

Is it possible to own anything in Russia? Arto Luukkanen, a Finnish historian who specialises in Russian studies, provides an enjoyable distillation of the very core of Russianness by investigating the issues surrounding the question of ownership. In Luukkanen’s complex analysis, the excruciating difficulty of ownership in Russia stems partly from historical ballast. Russian tradition maintains that if there is no master, nothing works. That applies to ownership as well, because there is a particular Russian mindset which holds that in principle, everything is the property of the ruler. Luukkanen states that Western-style property law was in force in Russia during the period from 1785 to 1917, but not before or after.

Russia is a combination of unpredictability and staticity, which has always made it a challenging partner to do business with. Despite its sweeping economic reforms, the Soviet Union was drastically left behind in comparison to the economic growth achieved in the West. Even Stalin’s henchman Lavrentiy Beria stated, “If there is no private ownership, nothing works.”

Luukkanen illustrates how the policy of reforms initiated in the 1980s by President Mikhail Gorbachev was unavoidable, yet too cautious with regard to the scale of the problems. President Boris Yeltsin’s modern grasp slid into infirmity in 1996, and Russia’s reforms remained unfinished. The triumphal march of capitalism did not materialise. The frantic redistribution of the 1990s took place nominally under the state’s political control, but in reality a large proportion of Russian businessmen and entrepreneurs were operating in a ‘grey zone’ or on the fringes of illegality. In the subsequent era of Vladimir Putin and Dmitri Medvedev it has become standard practice for clans to maintain contact with the Presidential administration and to lobby for their own interests in the state Duma.

Luukkanen presents an in-depth analysis of how the new Russia is an interesting combination of the old structural jungle of the planned economy and the chaotic rules of the new capitalism. As a result of toothless laws and weak protection of ownership, traditional capitalism has been divided into three different segments: market capitalism, oligarchic capitalism and ‘siloviki’ capitalism. In modern-day Russia, many ownership structures exist on top of one another, but they are not strictly delineated from one another. Russia’s current political system is based on control, not on ownership. Luukkanen maintains that freeing up ownership would also free Russian democracy from its current situation as a hostage, because there can be no democracy without ownership and ownership is a bulwark against the arbitrariness of the state. 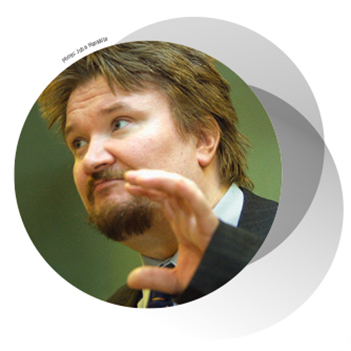 Dr. Arto Luukkanen (b. 1964) is a Finnish historian who works as a University Lecturer in Russian and East European Studies at the Renvall Institute, part of the University of Helsinki. He has published several monographs and articles on Russian/Soviet history which are considered to be standard works in the field. His previous works include: Hajoaako Venäjä (“Is Russia breaking up”, 2001), Neuvostojen maa (“The Soviets’ land”, 2004), Projekti Putin. Uuden Venäjän historia 1996–2008 (“Project Putin. A history of the new Russia 1996-2008”, 2008) and Suomi Venäjän taskussa (“Finland in Russia’s pocket”, 2010).