What is FILI? > Publications > A small country with many voices

A small country with many voices

The most intriguing thing about Finnish comics is their diversity. Although Finland is a small country in terms of population, it offers plenty of room for different approaches to producing comics. There is a great deal of visual experimentation going on, and comic artists freely pick and choose elements from the traditions of both art and entertainment for their work.

Comics are an accepted and widely read art form in Finland. Almost every Finnish newspaper publishes at least one Finnish comic strip, as do many magazines. Comics are treated on a par with other art forms in grant support programmes, and libraries acquire many comics and graphic novels.

Finnish comic artists are highly trained: nearly all of the younger generation of artists hold degrees in art or graphic design. This is also evident in the covers and production quality of the publications.

There are a number of small independent comics publishers producing highquality work in Finland. The Finnish anthologies Glömp and Laikku have been awarded the prize for best fanzine at the Angoulême International Comics Festival. Finnish comic artists have won many awards at the Fumetto festival in Lucerne, and Finnish titles have been nominated for the award for best graphic novel of the year at Angoulême.

The makers do not shut themselves away in the northern corner of Europe; they are busy establishing links on the international scene. This openness to outside influences is evident in the multiplicity of voices in Finnish works: there is not a uniform school or direction that must be followed here.

We speak a small language that nobody else can understand. Yet a surprising number of our comics are published abroad. Around 50 Finnish graphic novels have been published in French alone since the turn of the millennium. In the same period, a total of over 100 Finnish graphic novels by around 20 artists have been published in translation, including English, Swedish, Polish, Japanese, Russian, Spanish, Serbian, Italian, Hungarian and Portuguese.

I hope this brochure conveys the same impression we Finns have of ourselves: open to outside influences but self-willed; eager to experience things but keeping our work in order; a bit distant in the North but at the heart of the comics world. 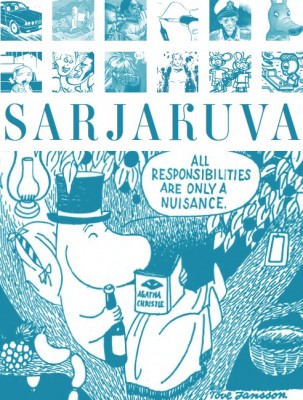