What is FILI? > Publications > From board books for babies to iPad apps

From board books for babies to iPad apps

No subjects are off limits in Finnish children’s and young adult books. In recent years, we’ve seen tremendously fun books on the tribulations of family life and the effects of empowering communities. The works published last year included a portrayal of the interactions between mankind and the natural world, featuring brilliant graphic illustrations (Auringon lapsia – “Children of the Sun”, Teos 2011), as well as a collection of modern-day fables about strange creatures and the cosmos (Kuningattaren viitta ja muita kiperiä kysymyksiä – “The Queen’s Cloak and Other Knotty Issues”, Tammi 2011), both of which are irresistible to adults and children alike. There were also many attractive, practical non-fiction books published in 2011 on subjects such as evolution (Evoluutio – “Evolution”, Avain 2011) and being mad about horses (Tikkumäen talli – “Star Hill Stables”, Otava 2011). Other recent books have addressed issues like social displacement and the breakdown of society, or the sorrow that affects an entire family when a young boy is dying of cancer (Surunappi – “The Sad Button”, Lasten Keskus 2009). Another is a father’s story of how life can go on after the suicide of a child (Älä yritä unohtaa – “Don’t Try to Forget”, Prometheus kustannus 2010). More than 1,000 new children’s and young adult book titles are published every year in Finland, if you include works translated from other languages. That means there is more literature published in Finland for children and young people than for adults.

The popularity of social media in children’s and young adult literature is just as evident in Finland as elsewhere. There have been young adult books featuring online and virtual lives for years now, and some books even emulate social media features in their structure. In the just-finished Pirunmeri (“Devil’s Sea”) project from WSOY, anyone at all could go online and contribute a short bit to a collective novel, which was also released as an edited, printed book. Taro maan ytimessä (“Taro at the Centre of the Earth”, WSOY 2010), a book written by Timo Parvela and illustrated by Jussi Kaakinen, was released as an app for the iPad and rocketed up the bestseller chart at Apple’s App Store. This tale of an exciting journey undertaken by a boy and a bear was selected for inclusion in the “New and Noteworthy” list, following in the footsteps of the hugely popular Angry Birds game by Rovio Entertainment, also from Finland.

Isän poika (“Papa’s Boy”, Lasten Keskus 2010) by Jukka and Leevi Lemmetty is also listed at the App Store and even has its own fan page on Facebook. This story about the efforts of a ballet-dancing boy mouse to establish his own identity has been made into an animated short film, which was shown at the Jaipur and Clermont-Ferrand international film festivals in early 2012.

Authors who are well-acquainted with the world of social media are carrying on and renewing a long-standing tradition based on storytelling, which is part and parcel of the Finnish language and culture. For example, the Kalevala – the Finnish national epic – morphs into a fantasy that appeals to boys and girls in Timo Parvela’s Sammon vartijat (“Guardians of the Sampo”, Tammi 2007– 2009) trilogy.

In Finland, even babies have stories read to them. Everyone born here receives their first book as a gift from the Finnish government. “Story crafting” is a very popular way of nourishing children’s interest in literature, and it is also a subject of academic research. The idea behind story crafting is to give children – and adults, too – opportunities to express their own ideas. The person who is the storyteller makes up a story on the spot and tells it, while a scribe writes down the story word-for-word and then reads it back, while the storyteller may still modify his or her story. Story crafting is telling stories – properly listening and paying attention to another person, perhaps with a new twist. According to researcher Liisa Karlsson, this Finnish innovation is already being employed on every continent all over the world. Finnish parents and children spend a lot of time together with books. Once again, Finland achieved stellar results in the latest PISA survey of reading skills among 15-year-old school students in OECD countries.

One factor that increases the diversity of Finnish children’s and young adult books is of course that there are books published here in three languages: Finnish, Finland-Swedish and Sámi. Tove Jansson’s sweet, wisely philosophical Moomin characters form the sturdy foundation of Finland-Swedish children’s books. Vesta-Linnéa och monstermamman (“Vesta-Linnéa and Monster Mom”) by Tove Appelgren and Salla Savolainen was published in 2001, launching a new era in Finland-Swedish children’s literature. While only a handful of original books in Swedish were published in Finland in the late 20th century, a few dozen new Swedish-language titles came out in 2011 alone. Finnish books are attracting more interest from all over the world. In the last two years, there were a total of 140 new translations of Finnish children’s and young adult books in 49 languages.

In the introduction to the Chinese translation of Riitta Jalonen and Kristiina Louhi’s Tyttö ja naakkapuu (“Girl under the Jackdaw Tree”, Tammi 2004–2006) trilogy of picture books, professor and author Mei Zihan remarks that these books will also touch the soul of Chinese readers, because they are written for “literature children”.

“Literature children are not satisfied with just the laughs that stories provide. They also know how to seek out emotions in stories; they can understand the image of mankind created by the author and can appreciate the author’s narrative style and the structure of the text. They enjoy literature and are capable of finding the spirit of the book in addition to the story. True children’s literature belongs to all age groups; it is for all romantic spirits and lost souls.” 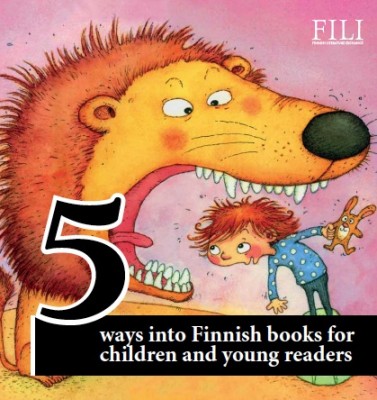