What is FILI? > Publications > History, pop icons and Arabic erotica

In Finland, over 3,000 non-fiction book titles are released by publishers each year, of which around 2,000 come under the category of general non-fiction. The total number of works published in Finland in 2009 that were designated as non-fiction books – a category which includes items as diverse as annual company reports and scientific publications – was around 8,000. The spectrum of non-fiction books is so broad because the category includes everything that is not classed as fiction. This is a very substantial quantity for a country with such a small number of people who speak its national languages.

Authors of non-fiction combine a passion for a particular field or subject with a desire to share that knowledge with a wider audience. That passion drives them to spend their nights, weekends and holidays writing, usually in addition to their regular job. I’ve had the opportunity to observe non-fiction authors toiling for over twenty years in my work as an editor and commissioning editor of non-fiction books. Time and again they succeed in getting me interested in their subjects, be they fun, serious or important in other ways. Their books may be about art or science, history, biographies, self-help books, practical guides – life in all its glory. While I can hardly bear to imagine life without literature, the thought of a world without non-fiction books is just as dreary.

We are now experiencing a critical period. The accessibility of the internet has meant that it has superseded traditional printed books when users want to find information quickly about something in particular. New technical innovations and experiments in e-books are being implemented all round the world. E-books do not necessarily herald the death of non-fiction books; rather, they have come to exist alongside traditional books, as a complement to them. The status of non-fiction books is determined not by the form in which readers access them, but by their content.

There are a number of awards given to non-fiction writing in Finland. The most significant of these is the Finlandia Prize for Non-Fiction, which is worth €30,000 and is awarded annually by the Finnish Book Foundation. In 2010 the prize went to a book by Vesa Sirén entitled Suomalaiset kapellimestarit Sibeliuksesta Saloseen, Kajanuksesta Franckiin (“Finnish conductors. From Sibelius to Salonen and from Kajanus to Franck”). The books that have been honoured over the years provide an excellent sampling of what is published in Finland and what sorts of works people buy: domestic themes, primarily Finnish history and significant Finnish personages, are of particular interest. Nature and environmental topics have also won the Finlandia Prize for Non-Fiction on many occasions. The great Finnish outdoors seems to be an inexhaustible source of material for illustrated books and guidebooks.

The emphasis in non-fiction publishing is on domestic topics, but of course there are books written in Finland whose style and subject matter make them eminently suitable for translation into other languages. The brochure you are currently reading contains a selection of eight high-quality, very well-written general-interest non-fiction books that have been published in Finland in the last couple of years.

These books have been selected with overseas readers in mind; their subjects range from social and cultural history to current pop icons and trends. Each one of them has something to contribute to the wider world. Fabergén suomalaiset mestarit (“Fabergé’s Finnish masters”) is a substantial illustrated work containing a great deal of information about the most beautiful creations of that house and the skilled craftsmen and -women who made them. It is also an account of the history of the Fabergé family and aristocratic life in Europe from the late 19th century until the Russian Revolution.

Kuka omistaa Venäjän? (“Who owns Russia?”) is a wide-ranging survey of Russia’s history and its contemporary situation. Though its fortunes may have shrunk, Russia remains a powerful nation with great riches, and this book’s analysis of who owns those riches opens up the inner life of that giant to us.

Written in a refreshing style with new interpretations of history, Susimessu (“Wolf mass”) presents a lively account of the religious wars of the 16th century, which also affected the Nordic countries and involved not only struggles for political power, but also the reach of Catholicism into Sweden and Finland. It is a story of loyalties, intrigue and looking out for one’s own interests.

Ettekö te tiedä kuka minä olen? (“Don’t you know who I am?”) is a deliciously funny examination of the history of arrogance. Historical heroes, having let power and success go to their heads, have caused a great deal of harm, and this book topples Alexander the Great as well as Napoleon from their pedestals. It also reminds us that obnoxious behaviour is not the exclusive domain of rulers and magnates. With spiky humour, Huimaavat korot (“Vertiginous heels”) whisks readers off to an exclusive New York shoe shop and forces them to question the entire culture of high-heeled shoes. What message are women sending out with shoes that cost thousands of euros but are ill-suited to walking in?

The world’s most amazing frauds have been collected in the volume Miten miljoonia huijataan? (Swindling Billions, 2011). Throughout history, people who dream of striking it rich have been duped into the craziest scams. What can you say about the fact that someone managed to sell the Eiffel Tower for scrap metal or that Bernard Madoff was able to swindle people from the very upper echelons of society for decades? 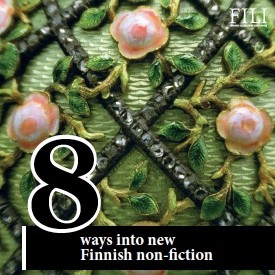