Finland-Swedish literature is a microcosm: you can find every genre represented in a body of literature which encompasses around 200 titles a year and whose primary readership numbers just 300,000 people.

Poetry has always held an important, special place in Finland-Swedish literature –like a sort of core framework. Prose works and ‘big’ novels have helped to pave the way abroad.

In her magnificent novels Den amerikanska flickan (2004, The American Girl) and Glitterscenen (“The Glitter Scene”, 2009) Monika Fagerholm has created a unique universe in which language and rhythm are an organic element of the narrative. Kjell Westö shapes true-to-life portraits of Helsinki in his perceptive, richly nuanced generational novels such as Där vi en gång gått (“Where we once walked”, 2006) and Gå inte ensam ut i natten (“Don’t go out alone into the night”, 2009).

Other significant authors who have managed to cross the language gap between Finnish and Swedish and are equally widely read and admired in both languages include Märta Tikkanen, whose Män kan inte våldtas (1975, Man Rape) can virtually be accorded the status of a classic. This book fitted right in with the wave of feminist literature in the 1970s, and throughout her career as a writer Tikkanen has been unafraid to tackle contemporary issues affecting everyone with a personal touch. Merete Mazzarella writes keen-eyed, warmhearted books and possesses a unique talent for putting her finger on current themes. One author who has long been relevant in both national languages is Claes Andersson – he is a former Finnish minister for culture, as well as a psychiatrist and jazz pianist. Tua Forsström is another major influential writer. She has won numerous awards for her poetry, which enjoys a large readership outside Finland as well.

There is a good infrastructure in place for those who wish to become authors in Swedish-speaking Finland, with two general publishing houses and a number of more specialised Swedish-language publishers in the country. The publishers compete with each other for authors, so this creates an excellent starting point for aspiring writers. Publishing activities are highly professional and market-oriented, but there is an underlying cultural responsibility which means that publishers take their budding authors seriously. Most books are translated into Finnish and published simultaneously in both languages, and a good deal of Finland- Swedish literature is also published in Sweden at the same time.

It is inevitable that Finland-Swedish literature is characterised by its status as a minority literature – in a positive sense. It does not ‘need’ to adhere to the literary trends, traditions, schisms or influences of the Finnish-language majority literature. It maintains its distance from Swedish-language literature in Sweden. Its own literary milieu is so small in scale that there are few rules or literary schools to either adhere to or depart from. This means that Finland-Swedish literature is quite free to be as wild, headstrong, experimental, or traditional a form of expression as it wants to be.

Or as Moominpappa – one of the most charming characters in Finland-Swedish literature – would say: “And I believe many of my readers will thoughtfully pause and lift their snout every once in a while to exclaim: This is life!”

The text quoted in the title is taken from a poem by Tua Forsström. 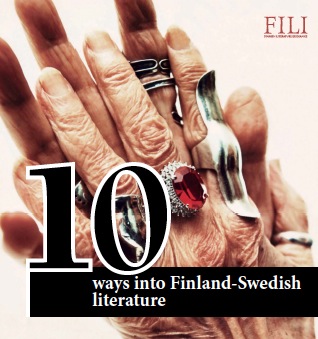